When we think of Hawaii, two things often come to mind: the Aloha Spirit and the Hula. Both were borne in a time long past when in legend Gods, Goddesses and humans walked the earth.

The origins of hula are open to interpretation. Some believe it came from the ancient civilization of Mu, some claim it was homegrown, while others trace it to Kahiki or Tahiti as it is known today. Most would agree however that inspiration from higher sources played a large part. For both ancient and modern Hawaiians, the hula is the life force itself. It links them with the universe and makes them one with all creation. Whether the original hula dancers were men is open to debate. There are however many records and legend, which tell of both men and women performing.
The use of the word hula to describe dance is specific to the Hawaiians and not other Polynesian cultures. The Samoans dance the sasa, fa’ataupati or lapalapa, with their main word for dance being siva. The Maoris chant and dance the haka or waiatuhaka. The Tongans main body of dance is called faiva, with the principal dance being the lakalaka. The Tahitians have the aparima or otea.

Whilst Elvis Presley movies may have brought hula to a greater public awareness, the dances seen in these types of movies, although entertaining, have little resemblance, depth of spirit, grace, elegance or sacredness that personifies this ancient art.
The hula kahiko or ancient form of the dance were and still are performed in traditional costume, accompanied by chanting and traditional percussion instruments, whilst the hula ‘auana or modern version of the dance is accompanied by the traditional instruments as well as more modern ones such as the ukelele and slack key guitar. The costumes also are more modern. The hula has 3 purposes: to entertain, to inspire and to instruct.
It is a cultural vehicle for social and historical commentary and passing of information. The dances and chants contain a magic that transcends even their power and beauty, filling both dancer and audience with Aloha.

The earliest forms of Hawaiian dances, the mele hula, were used either in their temple foms (ha’a) or their public forms (hula). Ha’a were usually performed as part of worship in the heiau (temple), under the direction of a kahuna (priest.) These dances were often done in conjunction with rituals and ceremonies related to the specific temple and also to specific deities within those temples.

“In many ways the hula is a form of worship, paying homage to the gods, with tales of their exploits.“

Other hula honoured the ali’i – the chiefs and royalty, whose genealogies often linked them to the gods. It was also danced for pleasure, with themes filled with deeply felt emotions. There was mana or life force and spiritual energy in the words, in the precision of the performance, in the discipline and harmony of the dancers movements and in their spiritual composure, a sacred continuum that links gods with man and all around them.

Every movement, expression and gesture in the hula has a specific meaning, from representing plants, animals, and the elements to listening, searching, sailing and so much more. The hand movements are of particular significance, with a good hula dancer watching their hands at all times and not the audience. Chants accompany the dance and assist in telling the story.

“Kuhi no ka lima, hele no ka maka’
Where the hands move, there let the eyes follow”

Regardless of the subject, the hula was danced with spirituality, an ever-present part of the experience for both dancers and audience. In both the hula and the chants are recorded the cultural history of the Hawaiian people, with legends, traditions, genealogies and history being preserved and passed down. The chants or mele for the hula are the integral narrative, paying homage, filled with deeply felt emotion. Being without a written language, the chants had to be memorized as the dancers also needed to be completely familiar with the chants being performed.

Musical accompaniment is an essential element of the hula. Some instruments are played by the chanters, with sharkskin drums (pahu) and gourd drums (ipu or ipu heke), being the chief accompaniment. Some, such as the feathered rattles (‘uli ‘uli), bamboo rattles ( pu’ili) and hand held river rocks (‘ili ‘ili) which are clicked like castanets were used by the dancers. The chanters voice also plays a crucial role in setting the tone and emotion of the dance.
The costumes of the ancient dances consisted a pa’u or skirt made of tapa, leis for the head, neck and wrists made from plants, and anklets often made of dog teeth, shells, seeds or whale bones.

Laka, goddess of hula, love, the forests and plants is widely acknowledged as the patron of the hula. The forest plants that served as offerings to Laka which are an important part of the sacred hula ritual and preparation, were considered a form of the goddess herself and therefore possessing her mana or spiritual energy. The ti or ki plant in particular is considered sacred to Laka and is used in many rituals and ceremonies for protection, to ward off evil spirits and bring good luck. It is an emblem of divine power.

All hula were preceded and followed by prayers, blessings and other ritual. Chants to Laka were performed, an alter built on the eastern wall of the hālau, symbolic of the life- giving force of the sunrise and filling the hālau (school or building) with mana. Dancers bathed frequently and offerings to Laka ritually cleansed and sprinkled with salt water.

“As Christianity began to dominate Hawaiian culture the sacred forms of the hula began to disappear.”

Because it was a symbol of the islands’ aboriginal culture, it’s gods and spiritual beliefs, the hula was not kindly looked upon by the missionaries in the 1820’s, and was banned until King David Kalākaua restored it to a position of honor and respect some 50 years later. Many of the sacred heiau’s were destroyed and the kahunas disgraced. The Missionaries viewed the sacred hula as “lewd“ and “lascivious”, offensive and subversive to their endeavours to rid the Hawaiians of their “heathen” past. However, much was transmitted by the hula masters and teachers from generation to generation and so it survived and flourished and served as a revival of Hawaiian culture. So now many halau hula or hula troupes and schools survive and are proliferating both in Hawaii and around the world.

The Kalākaua family, King David Kalākaua in particular, were main contributors in the renaissance and redevelopment of both Hawaiian music and dance. Consequently there are many chants and dances written in David Kalākaua’s honour. All good hula dancers exhibit good posture, which adds to the sacredness and dignity and sets the hula apart from other forms of Poylnesian dance. They posssess a feeling of harmony, balance and control. When choosing haumana (students), many qualities were looked for such as dedication, grace, posture and respect. To be chosen as a student was a great honour. Both the Kumu ( teacher) and the best dancers were highly respected and would often make a life long commitment to the dance. Training in hula hālau was strict with adherence to kapu (taboos ) being stringent. The kapu varied through the different schools, however certain codes of conduct such as personal cleanliness, not cutting hair or nails, abstinence from sexual activity and restrictions of certain foods were usual.

The students danced on a platform with an alter dedicated to Laka, decorated with vines and flowers in her honour. The graduation was a special ceremony performed with a strict protocol. The students stayed in the hālau for several days rehearsing, making leis, offering prayers and undergoing purification rituals. The graduation was then followed by a feast and a ritual dismantling and sacred disposal of the alter.

Formality of ceremony, ritual, etiquette and protocol are very important to the hula hālau. From the choosing of the materials for and the making of the leis that adorn head, wrists, ankles and neck, to the prayers performed before performances, to the dressing for a performance and the disposal of the leis afterward, often in the ocean, everything was done with ritual and respect.

Hula provided, as it continues to provide today, a source of pleasure and more importantly a means of educating both Hawaiians and non – islanders, in the mythic ideology and the ideals that provided Hawaiian culture with meaning and continuity. Hula is no longer purely danced by native Hawaiians. There are many haole or non – native people who resonate with and wish to perpetuate this beautiful dance and its sacred teachings worldwide. Whilst we may not be ‘island born’ in this lifetime, there is a deep cellular remembrance and great respect by many who hear the chants and dance the movements.

Today there are many hula masters reproducing the old dances as authentically as possible and also creating dances and chants based on the traditional manner.
The generations of today are lucky and privileged that this sacred dance has survived, to continue to pass on a powerful legacy. I for one am very grateful for the existence and perpetuation of this sacred teaching.

The most famous site associated with hula instruction (hālau hula) is at Ke’e, Kauai and has the most extensive recorded history and legend associated with it. A visit to this site is an experience not quickly forgotten for any modern student of hula. The energy of this sacred place is something I could not even attempt to put in to words, so profound and tangible is the energy there. Suffice to say on each of my sojourns there, I have been left in tears, unable to speak, and barely able to breathe.

“Hula is the soul of Hawaii.”

Perhaps next time you see this sacred dance being performed, whether it be in its ancient or more modern form, you will view it through different eyes and with a greater awareness and sense of its deep spiritual energy. 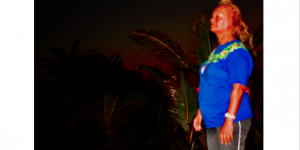 E Komo Mai & Welcome to Neaulani’s No’eau    Fearless ~ Grow ~ Adapt   Oct 6:  Aloha Kākou, todayʻs Hawaiian word is: Makaʻu ole which means: fearless and is pronounced: Mahkah oo ohlay. Fearless is the opposite of fearful and a much better place to be. Be makaʻu ole in your beliefs for they are… END_OF_DOCUMENT_TOKEN_TO_BE_REPLACED